As the Managing Partner for San Francisco-based recruitment firm, The Collective Search, Sam Marelich spends his days creating opportunities for his clients in the tech world. Although, if it wasn’t for a few very useful coffee meetings, he may not be where he is today.

Born and bred in Hamilton, New Zealand, Sam has never been one to sit still. While completing a Bachelor of Media and Creative Technologies and a Bachelor of Communication at the University of Waikato, Sam was on the board of the Waikato Students’ Union, wrote for Nexus Magazine, and was Vice-President of the Management Communication Students Association (MCSA).

In 2015 he was awarded a summer research scholarship and took a trip through the Americas, which had a profound effect on his next steps after university.

“There are often moments in life that shape your future. That trip was one of them for me”, says Sam.

The power of networking

Sam had been following Silicon Valley from a distance for years so made sure that a stopover in San Francisco was high on his itinerary. While exploring the city he took the opportunity to have coffee with the team from Kiwi Landing Pad, a San Francisco-based not-for-profit supporting New Zealand companies offshore. That coffee led to an internship role for their Sales and Marketing Jam event series, where Sam had the opportunity to rub shoulders with a number of US technology executives.

This experience solidified Sam’s decision that San Francisco was where he wanted to be.

With a one-way ticket to the United States, Sam left New Zealand in May 2016 (two weeks after graduating) with the intention of putting his marketing skills to good use for a tech giant. After a few months of fruitlessly trying to break into marketing, Sam was introduced to the team at The Collective Search and subsequently started a career in recruiting sales. The boutique recruitment firm focuses exclusively on hiring sales talent for venture backed software companies.

Building his way up

Four years on and Sam has worked his way up at The Collective Search, has shares in the company and has connected hundreds of salespeople with jobs.

“It is pretty incredible to watch a candidate come straight out of college to then watch them close $100,000 USD deals, only three years later. To know that you helped them get a foot in the door is nice.”

Sam says the many hours of group work he did while at university has put him in good stead for his role today. “Life is full of group work. It’s about learning to problem-solve together, while managing expectations to get things done.”

While Sam didn’t intend on making the shift to a sales and recruiting career, the skills he learned at university set him up to transfer relatively easily.  “I thought my career would be in marketing, but I love sales, and can’t myself moving back.”

Sam truly understands the benefits of networking with the right people. “It is always good to share a drink or meal with someone as you never know where that conversation will take you.” 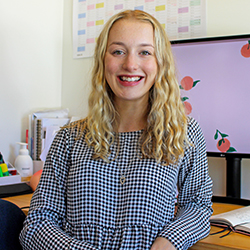