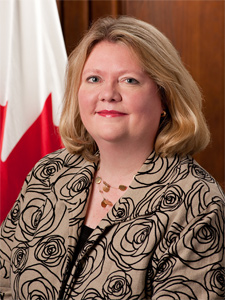 Ms Caroline Chrétien is High Commissioner of Canada to New Zealand with concurrent accreditation to the Republic of the Fiji Islands, the Republic of Kiribati, the Independent State of Samoa, the Kingdom of Tonga and to Tuvalu.

Prior to her current position, Ms Chrétien was High Commissioner to the Federal Republic of Nigeria. From 2005 - 2007, she was Director of the East Asia Division II at the Department of Foreign Affairs and International Trade. From 2003-2005, she was Director of the Korea and Oceania Division. From 2001 - 2003, she was Deputy Chief of Protocol of Canada and Director of Diplomatic Corps Services in the Office of Protocol. Between 1990 and 2001, Ms Chrétien was Policy Analyst for Québec and Constitutional Affairs in the National Liberal Caucus Research Bureau at the House of Commons, Special Assistant to the Leader of Québec and Constitutional Affairs of the Office of the Leader of the Official Opposition and Senior Special Assistant to the Prime Minister, Office of the Prime Minister of Canada where she was responsible for international visits, summits and Team Canada trade missions. Ms Chrétien holds an LLB from the Université de Montréal, Montreal. She was admitted to the Bar of Québec in 1991.

"New Zealand and Canada are longstanding friends and steadfast allies, and as High Commissioner I am always keen to promote the ongoing strengthening of the linkages between our two countries. I am grateful that the Association for Canadian Studies for Australia and New Zealand stimulates Canadian Studies through the region and aims to promote greater understanding of Canada at all educational levels and in all disciplines. It is an honour to be a Patron of ACSANZ and the Canadian-New Zealand Studies Unit."